The Handsomest Turkey Barns in Carneros 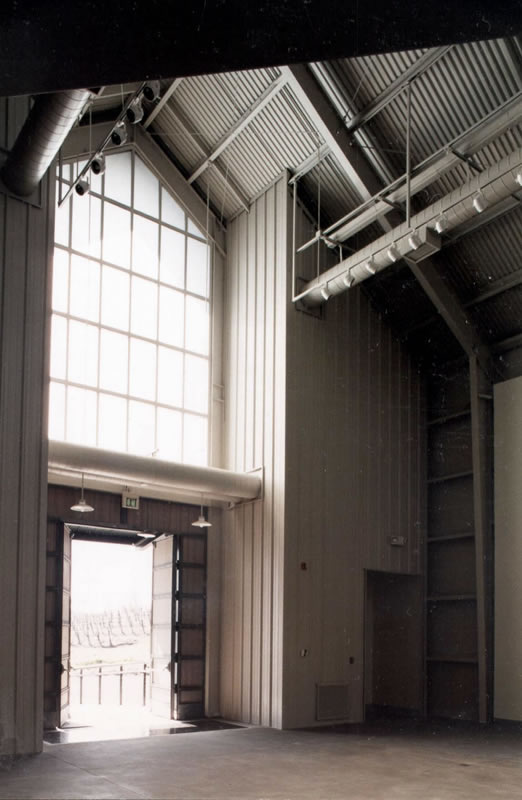 Gallery Buildings for the diRosa
Carneros Apellation, Napa County California
A presentation to the Design Forum of the SFMoMA, March 18, 2011
All photographs by Mark Darley

Quite possibly this was because he didn't actually have anything to say about it.

I somewhat share the premise that buildings speak for themselves, and quite possibly I actually don't have much to say about architecture. So it is odd to do so here at Rene and Veronica's.
The collection at the diRosa seeks to provoke. If art is an instrument for brain surgery, this stuff may be it's most blunt instrument.

And there is a story.
I have worked in this area, the Carneros region, since 1981.

I had never noticed Carneros until I visited the first of a series of clients here. I didn't like it much that day. It was colder, very windy, and it lacked the glamorous potential of an architectural practice in the Sonoma or Napa Valleys.
Carneros is a place for outliers. At the time of European settlement, this area formed the grazing lands granted to the Pueblo of Sonoma, then capital of the Northern California. The road on which we came was a muddy path only accessible in the summer. The real trail was a through the mountains and creek beds north of this site and it existed there until the 1930s. This region was a place that you were pleased only to get through easily. A place between the civilizations of Sonoma and Napa, but of neither. It is the frontier.

When Rene bought this land in 1960 it was not much better, and Carneros was hardly known for quality viticulture. The place could not support stellar Bordeaux style varietals like Cabernet. But it turned out to be fantastically compatible to Burgundian varietals like Chardonnay and Pinot Noir. These were to become the next fashionable California wines.

Or maybe Rene just told everyone that. He tirelessly promoted Carneros, and was made fortunate by his foresight.

Almost as accidentally, his collecting came to be of such a scale that it needed space. He ran out of walls, even ceilings. It was also clear that this had become an institution, and a legacy.

You can't beat Inigo Jones: The Virtues of Agricultural buildings

Quiet, monochromatic, background interiors are, of course, the usual script for gallery space. I could add that really super-ordinary boring farm buildings may also be the perfect foil for the outrageous, gregarious, perverse, and even dangerously beautiful nature of the collection.
It has been said that American building modules, standards and components began with barns. That the 4x8 module we still use was the perfect compromise of builder (largest he can lift), metric (divides into halves and thirds with even numbered inches), and Horse (smallest she can walk through).

Detailing those modules and standards is one of the differences between high architectural values and agricultural vernaculars. Unlike contemporary high tech craftsmanship, ag buildings do not display careful considerations to problems that their standard detailing cannot solve. They can be ad hoc, even sloppy.

God is not in these details, so how did She grace the better of these buildings? I think one subtle aid was through a technique sometimes called a Dominant Binder. That is, a unifying feature that renders details to mere texture. Think of Louise Nevelson sculptures: all black hodgepodges of scraps.

In the simplest examples, the building is made with all the same material. Then that material ages in various but consistent ways, depending on its weathering exposure. Like an all redwood California barn.
Most often, we enjoy this result from the paint. Our ag builders were not particular about paint colors or even paint. They'd mix up whatever they had a lot of, often blood and/or milk, and they would cover every board and door latch with the same goop.

Using a Dominant Binder can bestow integrity on a fair amount of chaos. It achieves the dumb integrity of All-One-Thingness.

Manufactured buildings are low tech, and messy at the connections. Especially when you mix up manufacturers. We floated the display panels, and didn't let them touch the messy skin and skeletal parts. Then we hosed our buildings with single colors. The Gatehouse is all galvanized. The Big Turkey is all black (well, dark bronze). The interiors were hosed the color of Carneros dust, because that was inevitable. The display panels float white. The Gatehouse sited on the dam of the lake, is the entrance gallery. It was designed as a pump house, a silo, a boat house and a garage. The collection includes a number of art-vehicles.

The Lake is unseen until the visitor reaches the front door, and its reflectivity suggested a design to capture the light in an upside down manner. We'd do the same at the coast: the light comes from below and bounces into the galleries from the ceiling.

The Big Black Turkey gallery is more introverted, with a low passage gallery adjacent to a huge top lit space.

From there the visitor takes a dripping tunnel and vaulted space designed in collaboration with the artist Paul Kos for his Chartres Bleu wall of video stained glass installation.

We shoot straight up in a glass elevator overlooking the art meadow, and walk into the diRosa residence, and experience the full-on domestic life of an art collector.

The manmade in Carneros has direct and simple forms. The light has an intense source but diffuse from the Bay moisture. To dwell here, in a land more ground than figure can be a bit of an Edward Hopper painting. Until you go in.