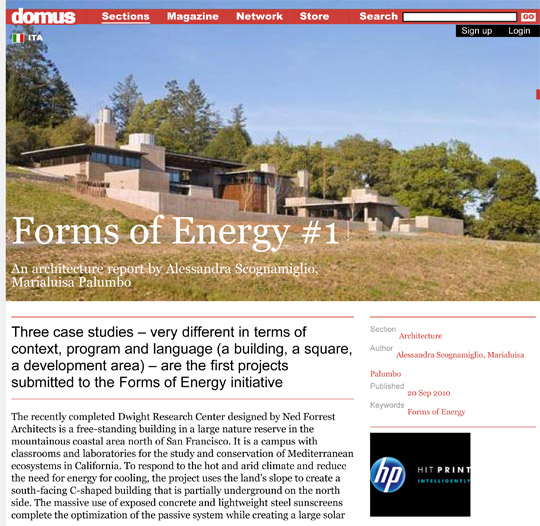 "The recently completed Dwight Research Center designed by Ned Forrest Architects is a free-standing building in a large nature reserve in the mountainous coastal area north of San Francisco. It is a campus with classrooms and laboratories for the study and conservation of Mediterranean ecosystems in California. To respond to the hot and arid climate and reduce the need for energy for cooling, the project uses the land's slope to create a south-facing C-shaped building that is partially underground on the north side. The massive use of exposed concrete and lightweight steel sunscreens complete the optimization of the passive system while creating a large solar canopy for a double-height entrance court. Firmly rooted to the ground but sensitive and responsive to the sun – material but transparent and open to the surrounding landscape at the same time – this building illustrates a silent technological solution elegantly integrated with an entire building...

...If we look at the three selected projects from an energy standpoint, it is easy to assert that they all work towards the same goal of energy self-sufficiency by using appropriate solutions and types of intervention on different scales. Solar technologies are part of the projects along with other elements belonging more to the traditional realm of architectural. It is like saying that in all three projects this choice lies in a domain that conceives of the building, or square, or the neighbourhood as a small – or even tiny – ecosystem whose metabolism is satisfied by energy provided by the sun. Not surprisingly, then, from a formal point of view, the use of photovoltaics is, for example, not particularly characterizing even when it is clearly visible. In other words, the use of solar technology is so mature that it is almost taken for granted thus leaving room for a more explicit architectural discussion.

So, looking at the projects and their contexts again, it is interesting to highlight the energy logic that underlies the specific design choices. In the first case, Dwight Research Center, the building is isolated in an area dominated by wild nature, and is, perhaps just like the local native plants, an organism capable of consuming very little energy (LEED gold certification) producing only what it needs to function. In a non-urban environment, the building stands in relationship to nature and the landscape drawing from them the energy that it needs to work well and to ensure user comfort. In the second case, the Plaza del General Vara del Rey, the square is the heart of an artificial ecosystem that is different from the previous one - the city. Here the goal is not to "resist" – taking from the environment the most possible – but to dialogue with the surroundings through a system of flows of matter and energy. The need is not so much to meet the square's energy demands but rather to create a balance on a larger scale so that the energy produced by the square's large photovoltaic roof can offset the energy consumption of nearby buildings or functions. In the third case, neo-rural, collective environment, the vision is even vaster and includes an ecosystem that is small, but more complex, in which units that consume and those that produce are present and where the careful design of energy production can once again generate a feedback loop that subtracts entropy from the system thus triggering a virtuous circle. In all three cases, energy and architectural form seem perfectly integrated. In the California building, the solar canopy is homogeneous with the other materials used for in the building in terms of pattern and texture making it almost invisible. In the Spanish square, although the photovoltaic modules clearly denounce the use of solar energy, the entire roof can still be read as a texture whose basic element is the photovoltaic cell. This texture, by virtue of the knowledge that we possess today of the need to use solar technology, no longer seems, like some time ago, extraneous to the traditional repertoire of materials and forms of architecture. In the Italian neighborhood, the only element that marks the presence of photovoltaics are the roofs of the individual buildings – surfaces that slope to find the best solar exposure maximising energy production."